Are you looking for a holiday where to combine all the comforts with a dose of adventure? That’s what gives you Nerja, a coastal town, 50 kilometers from Malaga will surprise you by the multitude of opportunities that it has for family travellers, couples or solo.

Nerja is one of the enclaves connecting the interior of the Axarquía region with the Mediterranean Sea. Its beaches are witnessed since the decades of expeditions of tourists from all corners of the world. Those who prefer to enjoy a beach day with the best services on foot of sand, find their place in the center of town, where dozens of restaurants await to try the local cuisine imbued with the flavours of the sea. Those seeking more tranquillity, meanwhile, can play hide and seek among the cliffs of Maro, a few meters from the center of Nerja, where you can discover small, winding wind protected coves and ideal for diving or kayaking.

There are few places in Malaga that allow to contemplate the magnitude of the Mediterranean Sea as the Balcony of Europe, a huge viewpoint at the end of an avenue surrounded by palm trees in the center of Nerja. This is the preferred place to finish a mid afternoon walk when the sun begins to hide until the next day.

Another recommended site visit is Acueducto del Águila. On the Maro river, in the XIX century, a sugar factory was launched to provide water supply. It has four floors of brick archways and in the center, there is a shrine with the inscription «»Pure and clean conception»».

Nature has turned Nerja in a privileged place, with the Cave of Nerja as the main exponent. It is a cave discovered in 1959 by five young and intrepid neighbours and has more than 100,000 cubic meters of history inside. Declared as the Property of Cultural Interest, researchers strive to certify that the Cave of Nerja keeps inside the first work of art known from the history of mankind. It is related with a set of paintings that could have been made by Neanderthals.

The Natural Park of the Sierras de Tejeda, Almijara and Alhama form a mountain range that gives Nerja a significant environmental value due to the diversification of its fauna and flora. The landscape of these mountains is the perfect counterpoint to the Natural Spot Cliffs of Maro-Cerro Gordo, one of the biggest tourist attractions of the city. Both enclaves receive rigorous environmental protection and conservation such as protected areas.

The beaches of Nerja receive every summer, the most prestigious nominations for its quality and services. The most famous of these is Burriana, though, if you have enough time, it is worth visiting the beaches of Calahonda, Playazo, Chucho, El Chorrillo, La Torrecilla, Carabeo, El Salon, Carabeillo or Caletilla.

In addition to the water sports that can be performed on its beaches, Nerja hosts one of the most important spots of active tourism in the province of Malaga: Chillar River. With an average gradient of 7.3%, this river run every year thousands of hikers who trace their route in any season. Its layout, with an upward slope, allows travel in its initial phase by anyone, including children and adults. Only the bravest will be able to reach its origin at 1,200 meters above sea level in the Sierra de Almijara.

Nerja is a privileged place to enjoy the two routes through the province of Malaga enclave, because it is end (Torrox – Nerja) and start (Nerja-Frigiliana) of two routes of the Great Path, indoor track, and at the same time, it is the starting point of two sections of the coastal path that runs along the coast: the Paseo de los Carabineros and route of Playa Caletilla-Salon Beach.

The calendar of events in Nerja starts in January with the festival of San Anton in Maro, and continues in February with Carnival.

In March and April the procession of Palms and Olives marks the beginning of Holy Week, characterized by the penitential processions.

In May streets of Nerja are filled with colour with Cruces de Mayo, an ideal date to taste local products. During this month, the day of San Isidro is also celebrated, where the carts are directed in pilgrimage to the shrine of La Mina, near the Cueva de Nerja. 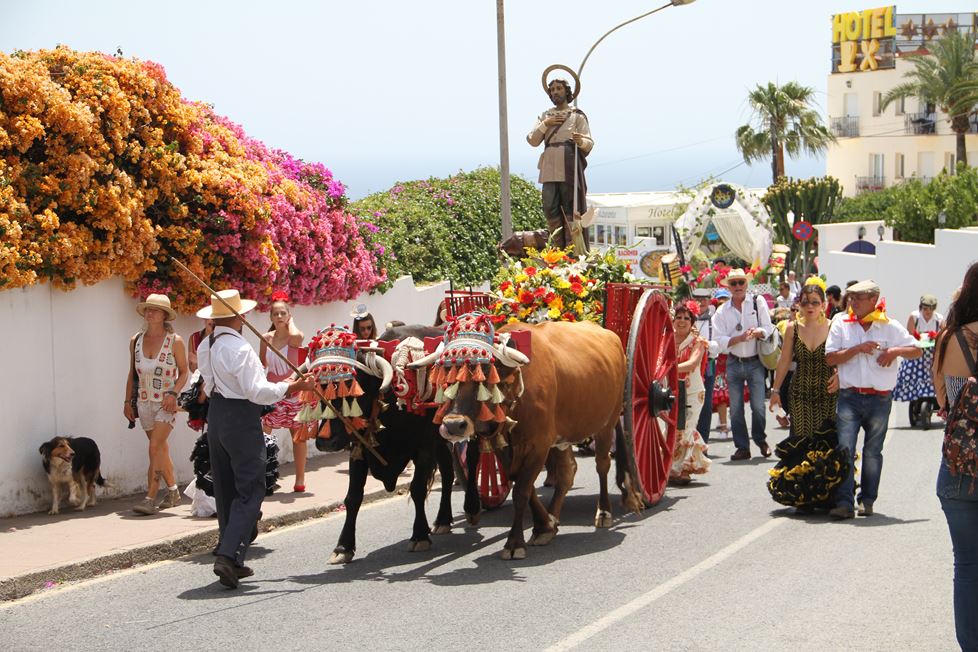 The night of San Juan in the early hours of 23 to 24 June, is another special festivities in this town. Burriana Beach hosts a great Moraga, after the burning of the «»júas (rag dolls), the younger ones jump on the fires and bathe in the sea. Another date linked to the seafaring vocation is that of July 16 to mark the day of the Virgen del Carmen.

Throughout the summer, the International Festival of Music and Dance is celebrated, which is being celebrated since 1960. Throughout yoir journey, you will receive orchestras, singers and most important ballets in the world.

Also in September, there is celebration in Nerja, since the fair of the Virgen of the Maravillas in Maro is held. In October, the celebrations take place in honour of San Miguel Arcangel and Our Lady of Sorrows in Nerja.

The subtropical climate of Nerja provides to its cuisine, an orchard with fruits such as avocado and mango, ideal for juicy and healthy salads at the same time. In addition, its pleasant temperature throughout the year, makes it possible that any time is good to taste soups and creams such as garlic soup (cold garlic cream and almonds that is usually accompanied by grapes), the emblanco fish (light soup of whitefish), noodle casserole or snails of this region. 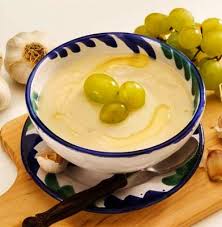 Other local products of mandatory tasting are loquats, molasses and arropía, a candy made from such honey.

Fish lovers will find in Nerja, one of its greatest treasures. The variety of species (anchovies, salmonetillos, squid, flounder) and ways to prepare it (fried in Extra Virgin Olive Oil, on the spit or grilled) satisfy the requirements of the most epicurean palates.

The archaeological remains found in the Cave of Nerja attest to the presence of man since the Aurignacian period of the Upper Palaeolithic. No other traces reveal the presence of other civilisations before the Romans, who settled in a small village under the name of «Detunda» in Maro, very close to the cliffs and the cave.

The earliest record of Nerja as such is a text by Ibn Said Al-Mughrabi from the tenth century. The Muslim poet mentions a village-sized hamlet where they make fine silk. «Narija» or «Naricha» such was the name of the village stood by a fort whose ruins can still be seen in Pago Castillo Alto, on the old road to Frigiliana. In the tenth century, a tower was raised to watch for potential attackers.

In 1487, Vélez surrendered to the Christian troops. To avoid further bloodshed, Nerja sent off envoys to pay homage to the Catholic Monarchs. As soon as Pedro de Córdoba took control of the village, its dwellers began to trickle away. In an attempt to stop this, Joana the Mad broughtold Christians from Vizcaya, Valencia, Galicia and other parts of Málaga to live here. 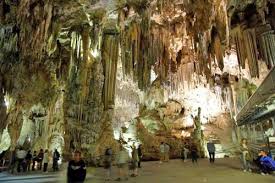 In the sixteenth century, a new fortress was built where the tower of the Balcony of Europe used to be. The fortress was later destroyed. The men and women who had left the older building settled around it. The Shrine of Nuestra Señora de las Angustias was built in those years too. The sanctuary where the Patroness of Nerja is kept features frescos by the School of Granada in its dome.

In the late sixteenth century there came to this municipality in the region of Axarquía first cane sugar mill. Two centuries later, the first paper mill began to operate, using water from the river De la Miel. On 25 December 1884, a devastating earthquake affected part of Andalusia. When he visited Nerja in the aftermath of this natural disaster, King Alfonso XII came to Paseo de la Batería and chose the site to become the Balcony of Europe.

Finding of the Cave of Nerja

In pursuit of a flock of bats, five boys from Maro were the first to enter the Cave of Nerja in 1959. Through a crack in the wall they reached a narrow hall which was later called «Discovery Hall». Inside the cave, the boys could not believe their eyes. A year and a half later, the cave was ready to welcome visitors and to hold its International Dance and Music Festival.

Designated as a National Historical and Artistic Monument and an Asset of Cultural Interest, this amazing karst formation is one of the most popular tourist sights in Spain, welcoming almost 500,000 visitors a year. Besides, the cave is a unique archaeological site, with over 300 paintings and etchings from the Upper Palaeolithic. The cave paintings, however, are in restricted areas that cannot be visited for conservation reasons.

We use cookies to ensure that we give the best user experience on our website. If you continue to use this site, we will assume that you agree.I agreeRead more